Doctor's House in the Market

The 2-storey building with its conspicuous steps was built in 1862. It contrasts with the mostly older, with the gable to the marketplace straightened neighbouring houses by its height, the sandstone base as well as the cripple's hipped roof. The half-timbered construction is hidden on the sides. In the market front it is protected by ashlar plaster against decay due to bad weather. At first in the possession of a local doctor it belonged temporarily to a farmer before successively to three carpet manufacturers from Springe. Since 1907 it is in the property of doctors who lived with their families in the rooms upstairs. 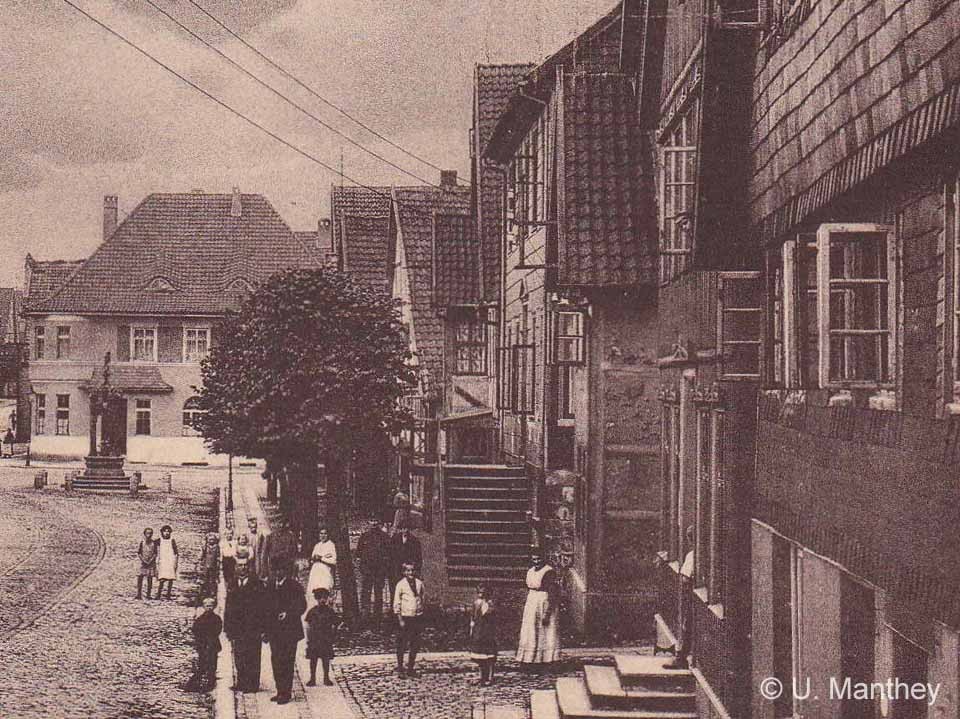 Litogr. from 1877 identify the house with outside staircase (left).

Generations of patients had to go up the outside staircase to come into the raised ground floor rooms of he practising doctors. First owner since 1831 was Dr. Friedrich Stegemann, practising and public health doctor. The rooms were high ceiling and provided good living comfort, on the backside of the proberty were stables, barn, washkitchen and cartshelter. The widow alienated all in 1856 to Eduard Capelle, farmer and owner of a brickfactory. He selled it fiew years later to Carl Roskamp, owner of a carpetfactory, located in the Hamelner Street. After insolvency in 1904 the factory and residence were overtaken by Franz Sachs, owner of springes second carpet factory, located in the Harmsmühlen Weg.
In 1907 Herrmann Stelling started his doctors office in the lower floor of the house. Initially he employed a carter, later a chauffeur. With farmcart and automobile people could arrive the backyard throughout the on the left side of the house located garage gate. The pigstall and animalfeeder are presence till today.
Next owner at from 1933 was Dr. Ernst Heinze, six years later Dr. Erich Förster, followed by Dr. Reinhard and Gisela Schüler.