At Whitsun in 1876 the landlord of the “Ratskeller” Christian Bauer celebrated the opening of a summer residence at the edge of the woods of the Ebersberg with a concert and a ball. He called the new public house “Deisterstation DIESTERA PORTA” and two years later he extended it to a hotel. The guests could listen to concerts or take to the floor in the hall. Soon a porch and the coffee-garden with grottos as well as a 12-metre-high fountain were built to invite the guests to enjoy the fresh forest air and the view. From 1898 the Fleischhauer family ran the public house and the number of guests on one Whitsun Sunday in those years was estimated at 4000. In the late 1920s 650 seats -250 outside- were offered to the visitors.
After World War II the summer residence was frequented again strongly by locals and strangers. The location lost its charm because of the houses built on the mountain slope.
Since 2014 the renovated house has successfully return to the tradition of former times. 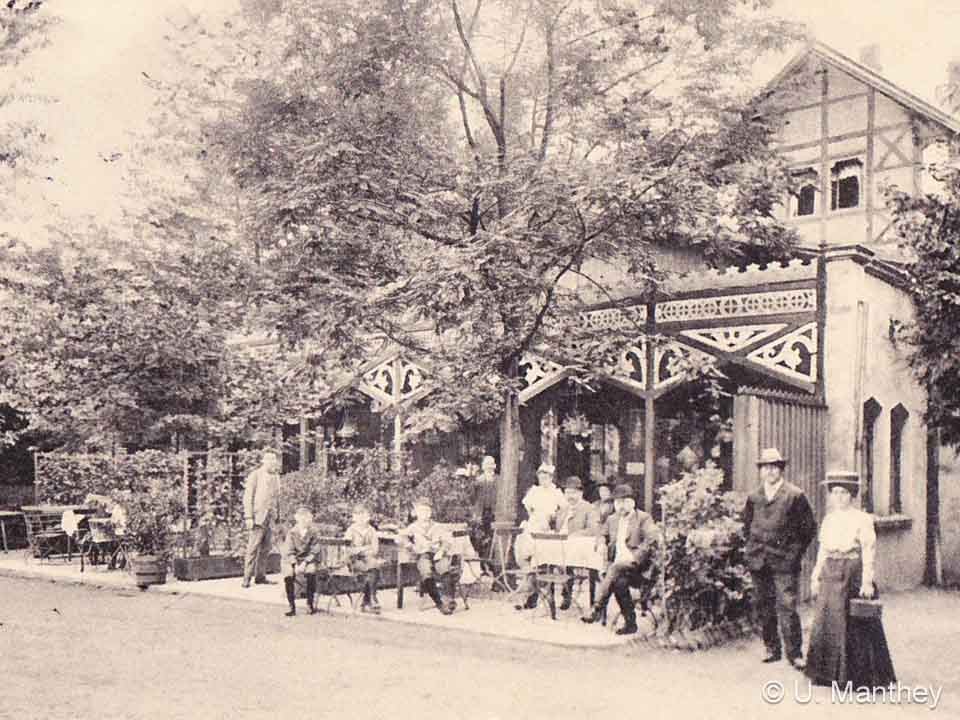 Before World War II, a photographer is taking photos of visitors on the porch of the "Deisterpforte".

Four years after the railway connection of the Deister region was opened the “Deisterpforte” became a popular destination for lower class people particularly from Hannover thanks to cheaper and more affordable tour tickets. “Springes Verschönerungsverein” complied with the visitors’ interests in beautiful views and shady paths by establishing the observation tower called "Deisterwarte" on the Ebersberg and planting lime trees on “Deisterpfortenweg”. For the people hiking soon in great numbers on the mountain crest route with more towers between Springe and Barsinghausen the restaurant with its fabulous view was the ideal place to enjoy refreshments. Here, well-off people spent their summer holidays, sometimes even with their own servants.
In the postwar period, guests still arrived by buses from a distance and the local families took their traditional Sunday walk in summertime to the "Deisterpforte", where they also liked to celebrate weddings or company parties. Dance events attracted young and old.
In 1939, after the city had started to tear down the “Deisterwarte” which used to be a tourist attraction in favour of a Göbel Monument -which was never to be built by the way-, the popularity decreased. In the 1970s with the highrise houses built despite a local protest the lovely view from the coffee-garden of the modernized public house was disturbed.
Affected by the fall in visitor numbers was the next door built Göbel bastion. The traditional burning of the Easter fire next to the guesthouse as well as the winter sports activities belong to the past now.