The stately house established in 1781 belonged to the first buildings after the disastrous town fire to be built up again. Owner was the postal governor's family Lindemann. They dispatched from 1767 to 1884 the postal items, supplied the riding posts as well as stagecoaches between Hannover and Hameln with horses and run a hostel. After the acquisition of the building by the town in 1905 the city administration as well as the savings bank which used to have their seat in the "Ratskeller" moved in. In 1976 the city administration was moved to the castle court. Today in the „Old City Hall“ there are accommodated among others registry office and tourist information. 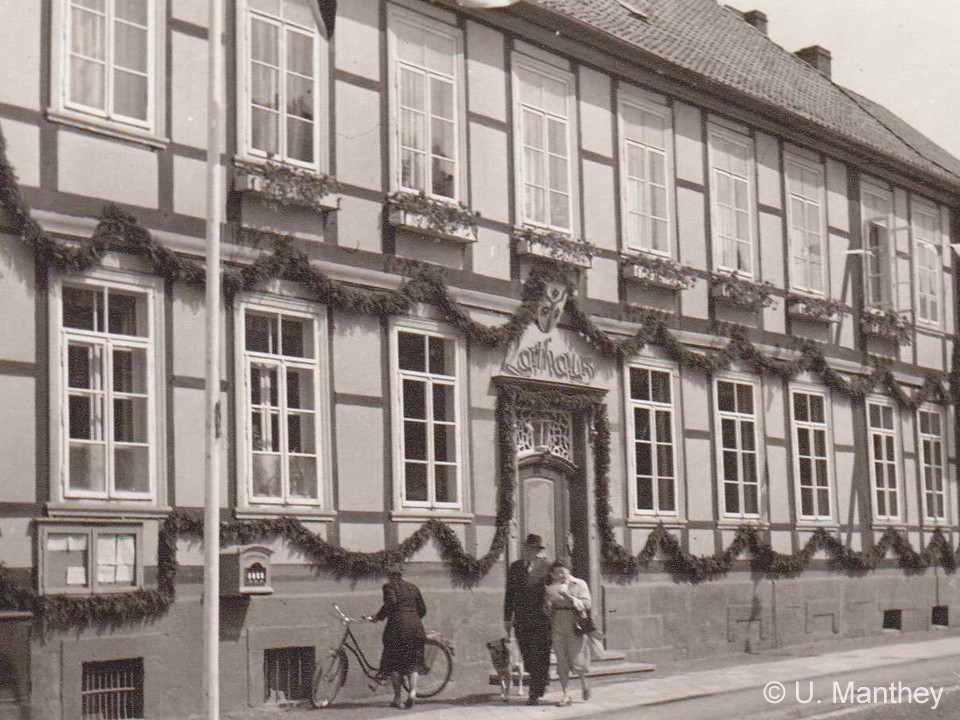 The picture shows the townhouse in the 1960ies. It is decorated with garlands probably during a fair of the shooting club.

Already in 18th century Springe got a mailcoach station. The first mailcoach arrived in 1738. Since 1768 postmaster Heinrich Lindemann was in charge of haulage and change of horses. He worked in his house in former Longstreet. An inscription in in the vault of the cellar tells us, that the house was rebuilt 14 years later after a devastating fire in the eastern parts of the inner town. An old drawing shows the western part of the building with two floors in the roof, two dormer windows and a gable. The sign mailcoachstation was placd in front of the open stairs. The stairs had been demolished in later times. After paving the thoroughfare traffic increased and the mailcoachstation became more important. Since 1820 the adjoined inn profited by hosting the invited guests of the court huntings in Little Deister. About 1860 the postmaster occupied a helper and five mailcoachmen.Some of the 21 inhabitants of the house may have worked in the inn and accompanying farm. 18 horses, 14 pigs, 13 cattle and 220 sheep stood in the stables.
In the 1870 years Springe got a railway station. This was the end of the age of mailcoaches. Meyer's modern hotel was opened. The Lindemann family had financial difficulties. Mayor Winter had been administrator of the fortune of the family. He lost it by speculation. 1883 the postmaster commited suicid by hanging. Winter had been on the wanted list, he fled to New York.
Soon the Postoffice moved to lower, later to upper stationstreet.