Since 1951 this sign has been helping visitors to find their way to the sights and the station. It was created by Helmut Benna, a Silesian native wood carver master from Schreiberhau, who had already made himself a name with humorous carvings before he came to Springe. There are more pieces of his woodwork to discover in Springe. As the inscription tells the manufacturer Friedrich Bähre donated the statue of the night watchman on the occasion of his company’s 50th anniversary. The figure equipped with halberd, lantern and horn received the fictitious label “council night watchman Heinerich” by a comical press column. 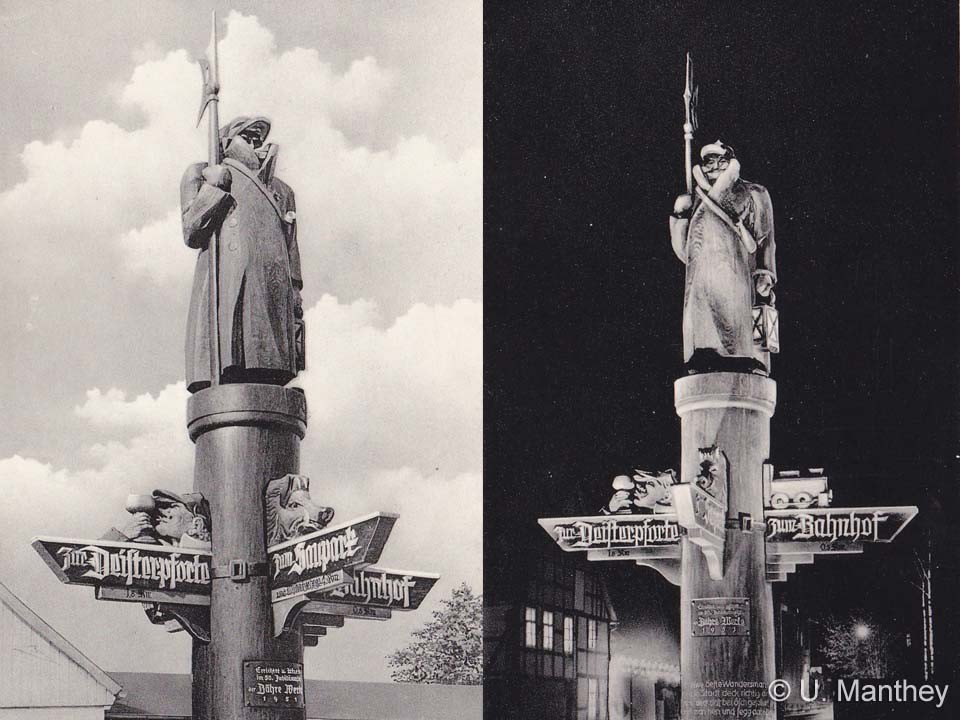 On postcards "Heinerich" is presented with the signpost during day and night.

This signpost was unveiled on the day of the new forest demarcation. The event attracted a large audience, including the sculptor, the financier and municipal dignitaries. According to press coverage, manufacturer Bähre made the donation because he wanted to showcase the material that was crucial for his woodworking business and the livelihood of the local population. The commissioned artist, Benna, was a refugee, which was regarded as a symbol of solidarity between old and new residents.
During the ceremony, a “Council’s Night Watchman” was appointed. He was ordered to, among other tasks, make sure that nobody leaves the public baths “still wet behind the ears”, and that late revelers do not trip over municipal garbage cans.
The inspiration for this figure came from Heinrich Hüper from Hoya, a teacher born in Springe, who published a regular newspaper column using a local variant of the Low German dialect (“Platt”). In his articles, he adopted the persona of “Heinerich” and engaged in dialogues with “Maräichen”, the girl depicted on the market square fountain, humorously taking aim at current events in the city. On the occasion of the new signpost being unveiled, the two statues “married”, which was expressed by a red ribbon connecting the two during the ceremony.
The humorous “Night Watchman” persona is not rooted in a concrete historical character. Yet, an actual night watch existed in Springe until 1929, at times with several employees. Whether one of them carried a halberd in old times is unclear. The hourly horn signals during the night, which are said to have reliably led to angry dog barking, were abolished in 1884 – probably in favor of a whistle, which did less to disturb local sleep patterns. Since 2005, the role of “Heinerich” has been taken up by Gerhard Mestwerdt, whose playful guided tours through the old town have become a tourist attraction.