This is the nicest and oldest building in Springe in the style of the Weser Renaissance the "House Peters" which consists of ground floor, mezzanine and a protruding upper floor. On the outside it is decorated with flat woodcarving of climbing plants and fantastic animal figures as well as inscriptions with ecclesiastical sayings in Latin. The "Utlucht"on the upper floor protruding on the left of the gable served for the better view on the street. Above the planking gate the builders’ names of the married couple Henrich Baxmann and Catrina Münchhausen as well as the year 1619 are noted. At the back of the east side where the mezzanine is missing there are remains of an additional entrance gate and the annual number 1616. In this part of the building going back to an older one, built with a cellar house one has discovered in younger time the annual number 1557. 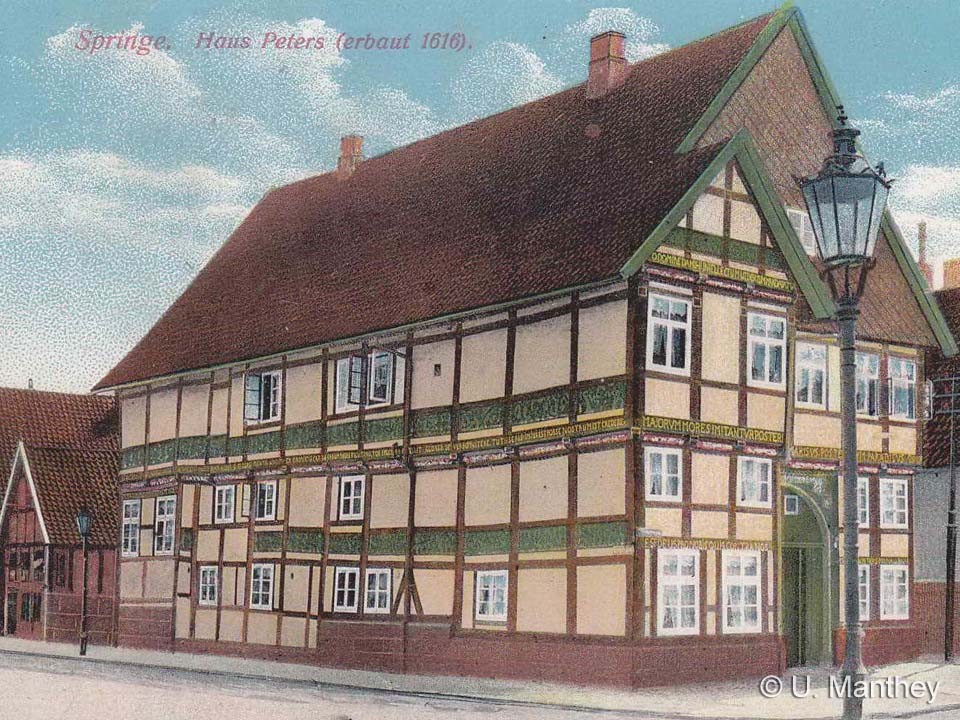 After the renovation in 1914 the building has changed to a gem.

About the certainly wealthy builder-owner Mr. Baxmann is only delivered that he was temporarily the innkeeper of the „Ratskeller“. The double inscription “POST” leads to the assumption that the building once was a mail station. The following owners of the building have been a captain-lieutenant (Capitän-Lieutenant) and a cavalry captain (Rittmeister).
Since 1847 the building was the property of the blacksmith-clan Peters for several generations. As a result the building owes his name (“Peterssches Haus”/ “Peters House”) to the family Peters. Today the former blacksmith´s shop is a hotel. In 1861 18 tenants lived in this building. The neighboring barn sheltered a horse, three cows, two sheeps, two pigs and a goat. Furthermore two households owned respectively a pig and a goat, which also lived in the barn.
In 1914 the restoration of the building was subsidized with public funds and assisted by a conservator. The former grey building was colorized and a weather vane has been added. Thanks to the successful restoration of the “Peterssche Haus” it became an architectural gem and a popular motive for pictures and postcards. Amongst further renovations which followed in 1953 and between 1985-1988, more inscriptions were added. The gate at the gable side which leads to an one and a half story hall with a gallery at the back and side was changed several times.