As the inscription on the only recently exposed balk reveals, the half-timbered building was established in 1781. From the early 19th century it accommodated Springe’s only chemist's shop together with a drugstore (“Materialienhandlung”). With the foundation year 1684 it is the oldest retail shop of the town which can look back at a more than 330-year-old tradition. It was first in today's St. Andreas's street, the former Kirchstrasse, and had before the move to the market its seat in the Burgstraße. A special attraction is the rather old Gingko tree plant in the backyard. 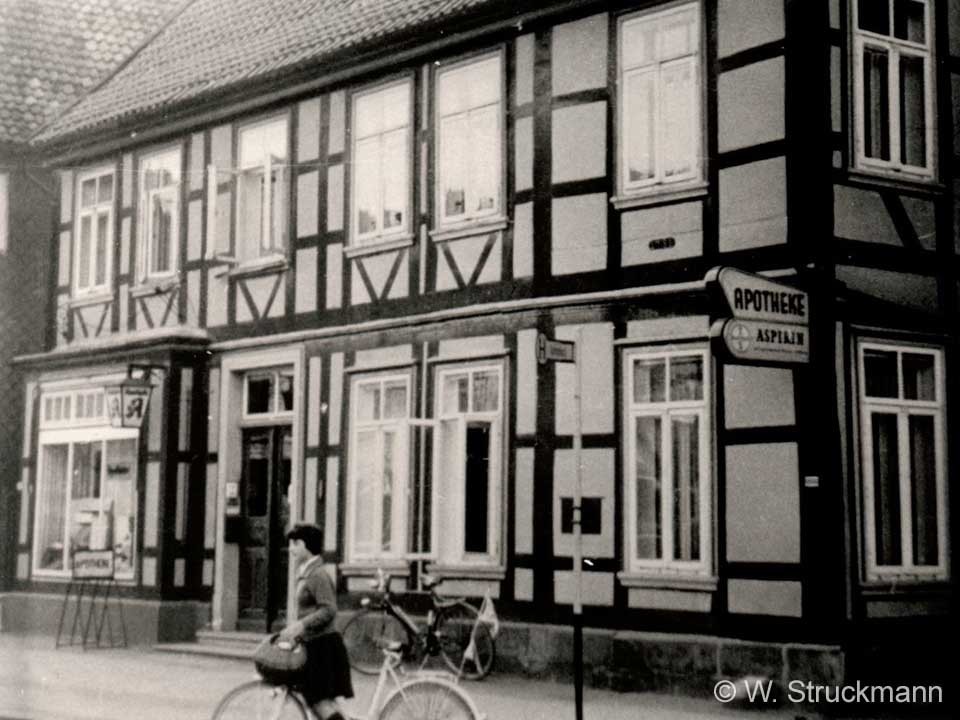 Picture, taken in 1962, before the pharmacy was refurbished and the drugstore was reopened.

This Pharmacy was opened in 1684 at a location , at which three generations of each, the Forke and the Capelle families run the pharmacy shop. (Andreas-Straße 5, - lateron at this place was erected a parsonage) Since 1891 the ownerships changed quite often, Julius Sprenger was followed by Ernst Lang, Max Hess, his widow Martina Hess, from 1958 onwards Elisabeth and Reinhold Leyhe. In 1989, the “Old Deister Pharmacy” was bought by Irmhild and Wolfgang Waldstein. Since 2009 it is owned by Mr. Wilko Struckmann.
In 1799 , King George III (House of Hannover), granted a lifetime concession to Mr. August Capelle to run this pharmacy on exclusive basis in Springe. This exclusiveness ended 160 years later, when the “Niedertor-Pharmacy” received a shop-concession. In 1809 Mr.Capelle moved his shop from Burgstrasse to the actual location on the Market Place . He received also the privilege to add on a separate “Chemicals- and Drug Store”. This shop was later reopened by the couple Mr. and Mrs. Leyhe.
It is assumed that Mr. Capelle, owner since 1872, planted the still existing and growing Gingko tree, located in the court of the pharmacy. Besides, the pharmacist was engaged in the social welfare of Springe, he also gained a high reputation as a specialist in botanics.
In his garden, he established a collection of rare seen plants, especially from the Alps Region.
He donated seeds and springs of the plants to the Botanical Gardens of Berlin.