From 1838 to 1842 the Guelph King Ernst August built the hunting lodge in the Saupark. Later on it was used by the Emperors of Hohenzollern. In the beginning it was a one storey building for guests and staff with utility rooms in the basement. East of it they established a Forester Residence with stables and depots. In 1878 the building complex was completed with a cavalier house for guests by an assistant of the Hanover master builder G.L.F. Laves. The former dining hall with Corinthian columns is named after him.
Its small size resulted in an addition of the “Emperor’s Hall“. The main building which was decorated at the facade with oak wreaths with crossed pigs’ spears was added with an upper floor and an attic in 1889. After the end of the monarchy the castle was a sanatorium for children of socially weak Hanover families. During the World Wars it was a military hospital and from 1947 to 1963 a district hospital. After the renovation by the Saupark forestry it has become home to a teaching academy for hunters and also a “Museum for Nature – Hunting – Culture“. 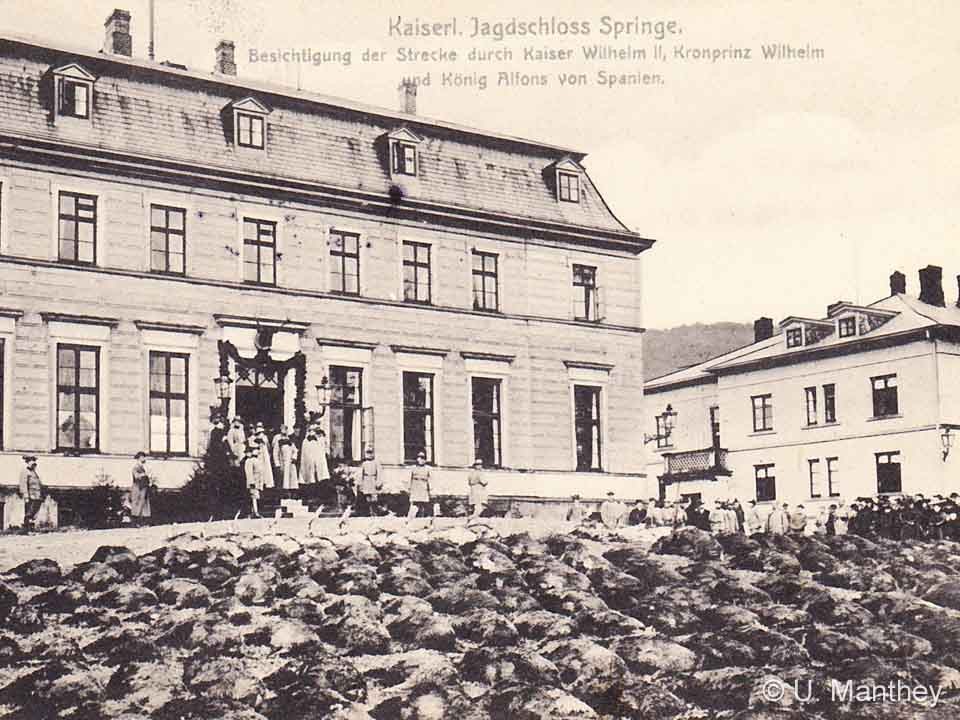 In 1905 the hunters are looking at their hunting success. To the right you can see that the spectators were kept at a distance.

Almost at the same time when the lodge was built the Saupark hunting ground was fenced by a 16 kilometre long wall, so that the wildlife stock would not cause damage to the adjacent fields.
While hunting parties initially travelled in coaches from the residence city of Hanover, they left the train in later years at the especially set up station „Kaiserrampe“ , from where they continued their trip to the castle in coaches and finally in automobiles to reach the castle on the later called “Emperor’s Avenue“ which was built in 1858. This castle as well as the train station were only used sporadically, because the royal hunts that were organized until 1912 generally took place every other year. Mostly the sportsmanlike amusement of the Hohenzollern monarchs and their top-ranking guests took only two days. They chased the deer directly in front of the trophy hunters’ shooting stands. In a final ceremony the killed animals were displayed in front of the castle. In 1905 e.g. when Emperor Wilhelm II had invited King Alfons of Spain, the line included 55 fallow deer and 540 wild boars.
The states hunt tradition, that was interrupted during WW 1 was taken up again in the 1920s. During the Nazi dictatorship Hermann Göring who also served as the “Reichs Professional Hunter“ went hunting several times. After the war so called State’s Hunts or rather Guest Hunts were arranged by the Land of Lower Saxony on invitation by the Prime Minister or the Ministry of Agriculture.