According to the inscription located at the staircase situated in the yard, this two story manor was build in 1775. The former Bailliff named Breymann established the manor in classicism style with its prominent middle section. Based on a pretty high plinth wall the two stories are constructed as a timber frame work. However, the homogenous painting of the Building should make it look like a solid construction as a whole. In 1868 it became the home of the Local Court. Furthermore, in the early years of its Local Court use, the administration of the City of Springe (later the administration of the Springe County) was also accomodated in the basement floor of the main building. The side wings of the building were used by the Seignory. Among other functions, a cheese dairy was operated by the Seignory within the building in the back. The building complex was enlarged in the 1880ies with its Heidstasse wing, accommodating the prison of Springe (later used as office rooms and by adding up another story as official residence). During its refurbishment in 1886/87 the old west wing was torn down. While the west wing was replaced by a two story new building connected with the old main building, the timber frame structure of the old west wing was reused for a new north wing building. 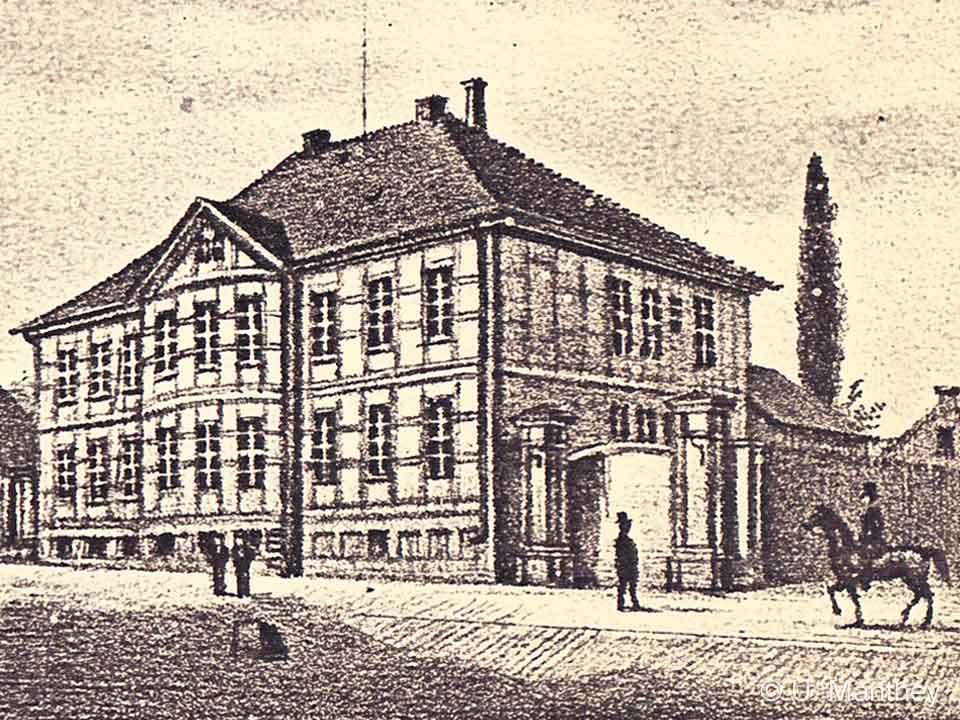 The lithography of 1877 still shows the old entrance gate located at east side of the court building.

Before the Breymann manor of 1775 was build, a previous ancient manor of the Uffelen family was located at these premises. Thus, the door lintel of the west entrance to the main building shows the year 1561 as an inscription. [The main building used to have another entrance door on its east side, where nowadays the memorial sculpture of Heinrich Göbel (inventor of the light bulb) is situated.]
In the early 19th century the Pawel-Rammingen family became owner of the Building and used to live there until 1850 George V (King of Hannover) took over the manor. Subsequently, it was passed on to his wife Mary and their daughter Frederike. Later the Royal Taxation Office bought the building complex and shifted over the Legal Court and the Seignory administration from the “Burghof” (today: City Hall) to this Manor. At that period, the Seignory administration´s responsibility comprises the towns of: Springe, Altenhagen I, Alvesrode, Bennigsen, Bockerode, Eldagsen, Lüdersen, Mittelrode as well as Völksen.
In 1880 the administration of the Springe County was relocated from the manor to the “Burghof”. Thus, the free office space was taken over by the Legal Court functions. Only the barn of the manor building complex stayed with the Seignory and burned down in 1894 killing approx. 700 sheeps.
The most recent renovation changed the footprint of rooms inside the building and restored the original homogeneous painting of the manor.