There is no proof that the house at address Oberntor 96 is the birthplace of Heinrich Göbel, born in 1818, there is no historical relation between birthplace and commemoration panel , fixed to the house. Heinrich Göbel lived together with his family for a couple of years in this by his brother owned house, before he emigrated to New York.
The commemoration panel with the “Eternal Lamp” was inaugurated at this half timbered house in year 1929, after a celebration party in Hotel Friese. Creator of this commemoration panel in bronze was the sculptor Hermann Scheuernstuhl from Hannover, who also created the sculptures “ Fishrider” and “Torchbearer” , which are installed at the banks of the Maschsee (Hannover). 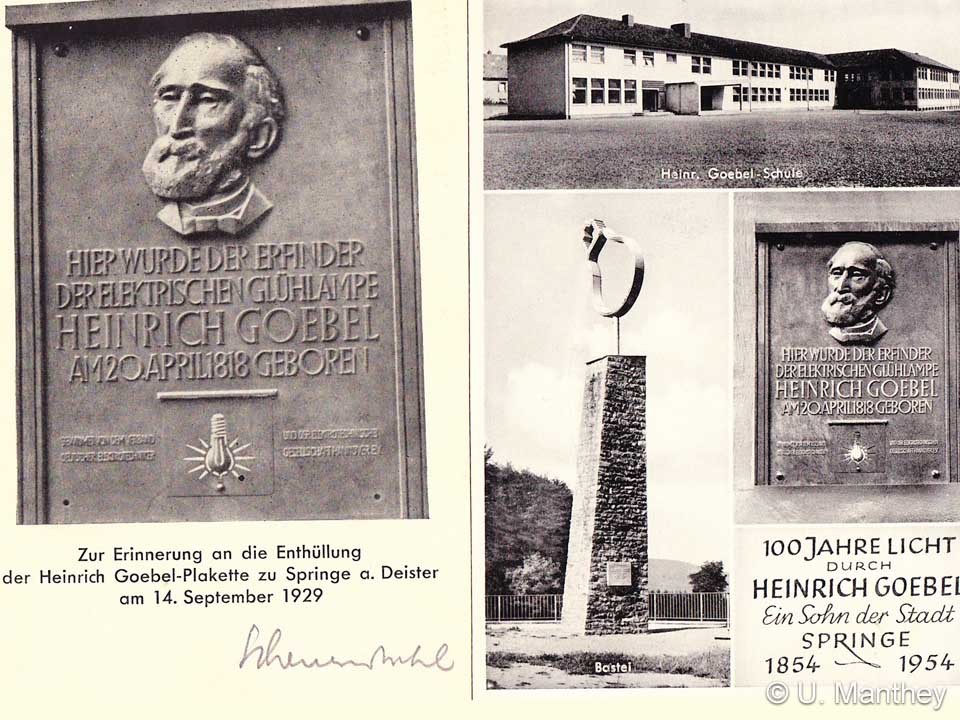 The panorama card of 1929 shows the signature of the Sculptor Mr. Scheuermann , who once created the commemoration panel .The card of the 1950ies shows the after Göbel named school and also the Göbel-Bastei, which was erected at the Ebersberg.

Dr. Hermann Beckmann was once the celebration speaker at the inauguration of this commemoration panel , which had been donated by the Electrotechnical Associations. Being an associate professor , he had once drawn in a technical essay the picture of Göbel being the inventor of the incandescent light bulb.
Heinrich Göbel , son of a landscaper and manufacturer of chocolate, absolved a apprenticeship as mechanic and later on started his own business as a watchmaker in Springe.
In later years , he stated that he had studied electrotechnics in his home country with a certain “Professor Münchhausen”.
In 1848 Göbel emigrated together with his family to New York.
Being a US Citizen he changed his name into Henry Goebel and started an own business as watchmaker and optometrist.
In the beginning of the 1880ies he registered patents “hemmer for sewing machine” an improvement for a “vacuum pump” and as well a patent for a “ electric incandescent lamp”. There is good proof for Goebel being an inventor.
After a short time employment in electric light industry he planned to develop further electrical products.
It is assumed that he started first time in 1882 to claim of having invented the electrical incandescent bulb years before Edison, this (priority) demand he repeatedly raised as witness in affidavits ,which were incurred into (patent)law suits about the Edison Patent ten years later.
Henry Goebel died in 1893.
At the occasion of the 100-year jubilee of the invention in 1954, the Göbel-Bastei was erected together with the Göbel-Memorial at the Ebersberg in Springe.
In year 2004 the German Bundespost honoured the emigrant Göbel , born in Springe, with the edition of an “Extra-Stamp”. It was followed by a TV-Show, in which the spectators elected him to the (all time) “ best German inventor”.
In 2007 , Mr. Hans-Christian Rohde published a book “ The Goebel Legend “(“Die Göbel Legende”) ,in which he concluded that there is no proof for the respective invention of Mr. Göbel, which as a consequence annoyed local patriots.