Remains of an old moat remind you of the moated castle that was once built at this very spot by the Earls of Hallermunt. After having given up their family castle in 1282 they transferred their main seat into the valley of Springe. This castle was first mentioned in 1388. After losing the reign to the Guelphs the administrative centre was established there. This building burnt down in the Thirty Years’ War. In 1694 Eleonore von dem Knesebeck was arrested in the administrative building. She was the court lady of the electoralprincess Sophie Dorothea who was imprisoned in the castle of Ahlden, because she betrayed her husband and divorced. The basement of today’s North wing is said to date from 1500, the upper floor from the 18th century. The other wings are newer. From 1885 onwards the quarrystone building became the home of the district office for the newly formed district of Springe, for a time the home of the savings bank. Since 1974 it has been used al the cityhall. 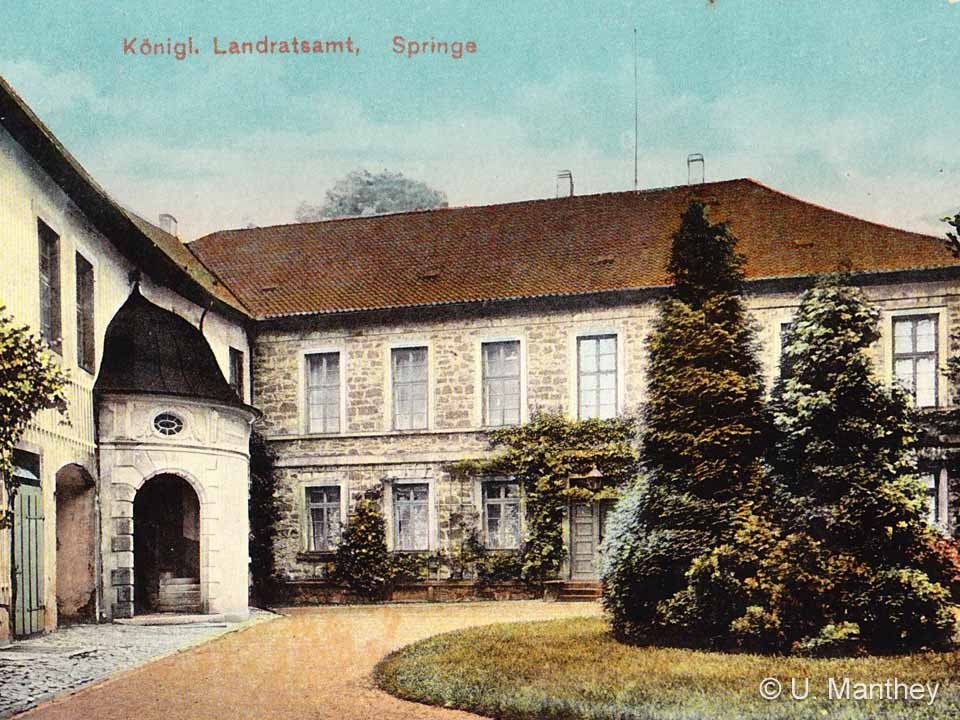 The picture was taken around 1913. The new porched staircase leads to rooms of the County Savings Bank, that had moved there two years earlier.

Other than the district emblem there are two old stones with coats of arms mounted into the wall of the castle court yard. The one that is dated 1548 can be related to Duke Erich II („the Younger“), the other one dating back to 1600 to the Danish Princess Elisabeth, wife of Duke Heinrich Julius. Both items were fixed to the pillars of the court gate, according to written records „originating from former castle“. Two pillories, originally standing in front of them, disappeared. Before they were misused as parking posts.
Only the granary and the stables of the former estate, the stately home, have been well preserved and used by the „Museum auf dem Burghof“. Other buildings were torn down after the war, when streets were built across the court. One of the domain tenants, living in what is the police office, was Oswald Falkenhagen, whose affair with the district administrator Adolf von Bennigsen ended up in a duel with pistols. There is a commemorative plaque in the Bison Park that recollects the site of the ritual in which the challenger von Bennigsen lost his life. In a spectacular lawsuit, in which the older woman was considered as an accomplice, the lover was sentenced to non-dishonorable imprisonment.
The park close to the garden of the domain tenant with originally two parts has been made accessible for the public after the closure of the large-scale farm. The gate at the entrance was made by sculpurer Helmut Benna.