Rested on a solid plastered dado, the timber-framed city hall was used until 1907, being re-built 1657/58 after succumbing to a fire in the Thirty years war. The previous building already housed a pub which was located in the basement. Evidence of rent and repair and maintenance cost being paid are first mentioned in 1611 in the city cash book of Springe.
The served beer was delivered from the city brewery located at the rear of St.-Andreas-Straße. It is only due to the 1818 newly erected solid ground floor, that it is actually back to back with the city council hall. After the brewery was given up around the 1880’s, an additional function room was set up in the first floor behind the magistrate rooms. Since the move of the administration to, what is now known as the “Alte Rathaus”, the “Ratskeller” is privately owned. The over 400 year long continuous gastronomy extends to this day. The symbolic meaning of the animal and man like masks surrounding The City Coat of Arms on the flag stone next to the entry door has not survived. 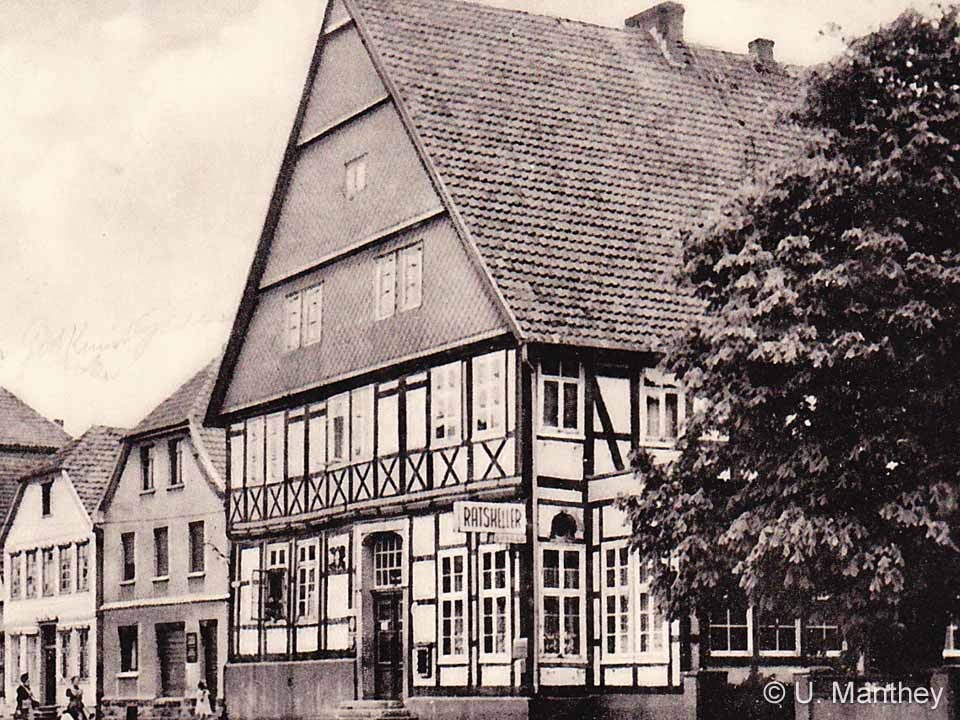 In the 1920ies the Ratskeller gable is covered by slate cladding. The ground floor is extended by the annex on the right hand side.

The close relationship between the “Ratskeller”, city hall and brewery dates way back. The city held the privilege to sell alcohol. The beer which was brewed by the citizen, who held the rights for it, was stored in the cool cellar and not only severed to the Magistrates but also sold for a fixed price in the adjacent pub. This consisted in 1750 of a public room with a cast iron oven, hallway, buttery, kitchen, as well as a timber storage room, a pig stall and a loo. The upper floor comprised additionally to the council chamber a so called “shame pole“. The attic was used to store corn and accommodated the lock-up-room/prison.
The continuous auctioning to the highest bidder resulted in a frequent change of land lords, who, from 1700 onward, suffered fierce competition from the next door pub “Deutsches Haus” and from the more comfortable coaching inn. The watery and easily perishable sweet beer from the brewery was, with the increasing demand for brandy, soon less desired. With the rise of the brewing industry which were able to sell cheaper beer, the city brewery was given up. With the subsequently established function room, which was also used by sportsmen for their training, the” Ratskeller”, whose land lords also run a pub garden on the Tivoli, regained its popularity. The vacancy of the municipal administration rooms allowed the extension to a privately run hotel. The pub was popular with all local clubs.
The function room, which was rebuilt in to a movie theater after the war, today hosts cultural events. In recent years the ground floor of the brewery annex was temporary used as a Volksbank branch and solicitors office.