Since 1903 the smith-iron work established on a standstone foundation decorates the place in front of the Peterssche Haus. It was donated by Sanitätsrat Dr. Heinrich Seebohm and his wife Marie. The well was probably named after her. On each of the opposite sides the town coat of arms and the Lower Saxony horse as the state emblem can be seen. The gargoyles are incomplete, since the tree frog originally located above the fish is missing. The well is crowned by a Kiepenträgerin. The figure should remind the visitors of the women who used to collect wood from the urban forests with shoulder baskets (Kiepe). 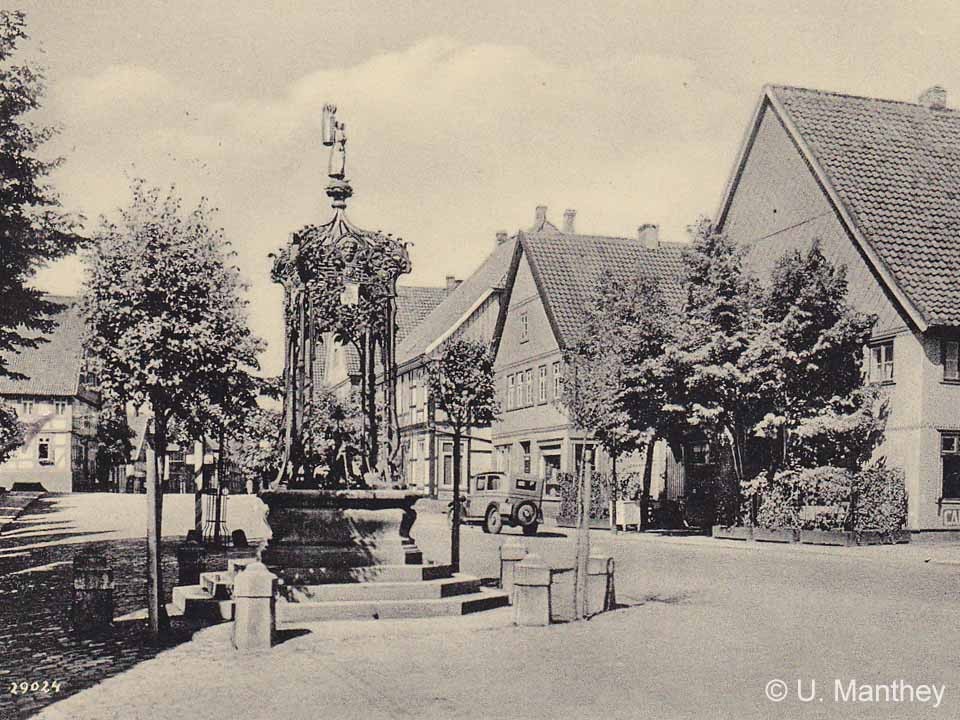 In 1930 the well is surrounded by bollards and trees.

On the occasion of his silver wedding anniversary in 1900 Medical Officer Dr Seebohm promised to provide the town of Springe with a fountain, on the condition that the town would receive a modern waterworks. Dr Seebohm, who was later made an honorary citizen of Springe, added his own donation to two contributions which had already been given for this purpose. For years Springe’s citizens had complained in vain about the poor quality of the town’s water supply, which came from public and private wells, as well as from several “Piepenposten” in the centre of the town. The water from the latter flowed constantly via wooden pipes from a pond which received its water from the River Samke.
When the town council had a water tower built and water pipes laid, Dr and Mrs Seebohm fulfilled their promise. The year before they had seen a model of an art fountain with a goose-girl on the top at a trade exhibition in Düsseldorf. In the summer of 1903, the manufacturer, Art Metalworkers Feller from Düsseldorf, delivered the finished product, designed in accordance with the Seebohms’ ideas and stipulations. The sandstone base was built by Master Stonemason Borcherding from Springe. At the beginning, the mouths of the fish and frogs appeared to remain dry, apparently due to lack of water, which happened repeatedly in later years.
Almost five decades later, the name “Mariechen” was chosen for the figure, which was removed from the fountain for a time. The upright stance of the pannier girl with wooden clogs, which were not typical for Springe, did not conform to the traditional picture of the old women from the urban poor who bore their heavy loads with their backs bent. They were not permitted to carry more free dead wood from the forest than they were able to carry in their panniers.