On the occasion of the 10th anniversary in 1986 the Rotary Club Springe donated the bronze sculpture created by Nobert Labenz from Hemmingen. Designed as a counterpart to the Kiepenträgerin on the Marien's well the market girl with three apples on its lap sits on a basket which is turned around. According to a press report the artist wanted to point to the nearby bison' enclosure as well as to appeal to the senses of children with the piglet and the owl who are to be discovered at the back. More or less the figure lacks historical background since the regional character of goods or services is not focused.
Besides, the weekly market has been established in this street segment which used to a busy thoroughfare only in younger times. 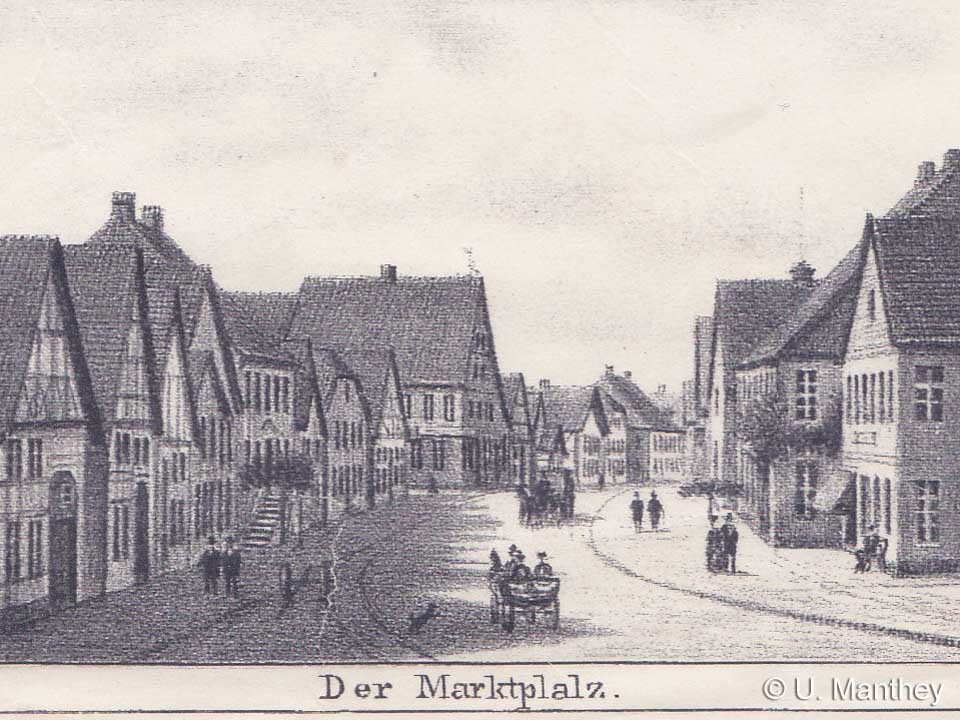 In former times the marketplace may have been situated southern of the church. Later the site had been build up and the marketplace was installed at thoroughfare.This street was a bit wider, the houses stood in line but not rectangular to this line. It lacked the typical character of a marketplace of other towns. A fair in Springe was mentioned first time in 1622. At the beginning of th 19th century it took place twice a year. In 1814 the town got a permit for three fairs a year, spring, summer and autumn. Trade with common merchandise took place in towncentre, livestock was sold outside of the lower gate in the street which is called today „Hinter der Burg“. A report dated 1877 mentioned trade in pigs, booths, carousel, shooting galleries and complains about terrible screaming and noise.
Three decades earlier threre existed a weekly market but only for a short time. „Butter, eggs and other things“ had been sold. Between 1949 and 1961 the weekly market took place in the Heidstraße. 1973 aftter a long interval the weekly market had been continued on a parking place at the Fünfhausenstraße. 1984 after establishing the pedestrian precinct the weekly market moved there in the rearranged centre of town. In the beginning on fridays, only now on tuesdays also. Several inns with outside serving started business. Especially during bright days lots of visitors are attracted.