In 1945 there was triple reason to celebrate for a fortnight: the 700th anniversary of town rights, the 500th anniversary of the St.-Andreas church and 100th anniversary of the alleged invention of the electric light bulb by Heinrich Göbel who had been born in Springe and immigrated to NewYork in 1848. To honor him the theatre play “Mister Flaschenlicht” and the “Licht –Kantate”were performed. One topic of the historic parade was called “Vom Kienspan zur elektrischen Glühbirne”. (From pinewood spills to electric bulbs)
The highlight was the opening of the Göbel Bastion at the foot of the Ebersberg. After the arrival of a group of youngsters carrying lights to the about 12 metre high monument the symbol of the electric bulb on top of the obelisk was switched on. 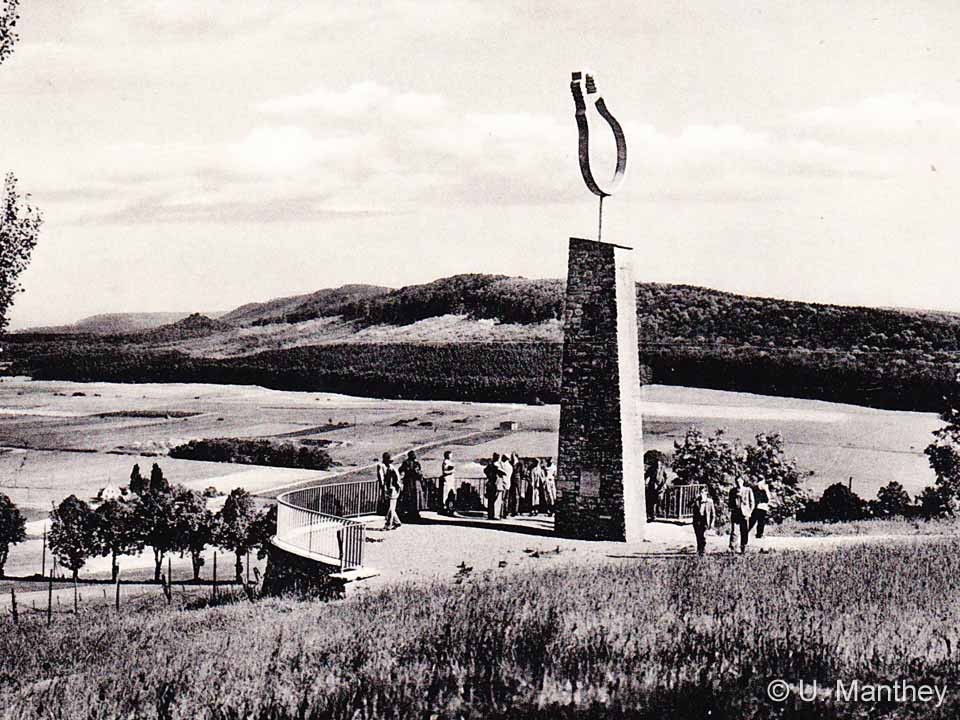 In front of the „Göbel-Bastei“ visitors enjoy the unspoiled landscape in the 1950th with a view on the town and the surroundings.

During the Nazi dictatorship attempts were increased to hold up the memory of Göbel’s alleged invention of the electric bulb on his 120th birthday in 1938. In addition to a newspaper article which described the supposed birthplace as a “memorial of a German invention and small German sanctum“ according to a plate fixed to the building (see also: birthplace of Göbel) the son of the town was to be honoured with a tower, which was suggested by the Heimatverein (Home trust). Springe’s councillors under leadership of mayor Jürges supported the project which was being looked upon as a measure to speed tourism in the town and region. Unfortunately they sacrificed a tourist jewel by allowing the destruction of the popular "Deisterwarte" at the Ebersberg mountaintop. The plan was to establish a bombastic "Goebel bastion" with a restaurant as well as night flashing light installation above a view platform. Due to the beginning of World War II these plans were put to a stop.
In 1954, shortly before the jubilee particularly chief executive of Springe Degenhardt, head of the “Verschönerungsverein” (an association to care for the beauty of the town) strived to correct press articles in which Edison – and not Göbel-was stated as the inventor of the electric bulb and inserted in vain for the publication of a Göbel stamp. A producer of electric bulbs sponsored a memorial tower established below the Ebersberg because of Degenhardt’s activities to promote the memory of Göbel. This tower was meant to shine as an impressive commercial of the electrical industry and to lead the heavy traffic on road B217 and to attract tourists in hordes. Now the landscape is affected because of the buildings on the slope.
Similarily, the picture of the electric light inventor from Springe has changed because of the book “The Göbel Legend” by Hans-Christian Rohde, published in 2007.